Mosquito Joe was recently named a top franchise by Franchise Business Review in its 2016 Top Franchises for Veterans Report.

If you aren’t familiar with the Mosquito Joe opportunity, you might not know we began as a mom-and-pop mosquito control business in 2010. Franchising began in 2012, so in just a few short years, we’ve grown to become an industry leader with over 168 franchise locations open nationwide.

Franchise Business Review, a national franchise market research firm that performs independent surveys of franchisee satisfaction, provides the only rankings of franchises based solely on actual franchisee satisfaction and performance. Mosquito Joe was among 158 franchise brands, representing over 22,000 franchise owners, that participated in Franchise Business Review’s research. Of the 22,000 franchisees, approximately 2,500 are veterans. Mosquito Joe franchisees were surveyed on 33 benchmark questions about their experience and satisfaction regarding critical areas of their franchise systems, including training & support, operations, franchisor/franchisee relations, and financial opportunity.

Mosquito Joe scored higher among military veteran franchisees than other brands surveyed in their overall satisfaction including areas like Franchise Community and Financial Opportunity. 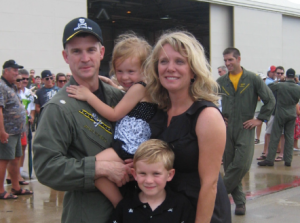 “We feel vets bring the right set of experiences and work ethic to our business. Veterans coming through the pipeline look at the other vets in our system, and it resonates with them. We can look veterans in the eye and say, ‘We understand that you don’t have any experience in the private sector, but we can be a backstop for you as you make the transition,'” says Brian Garrison, Chief Operating Officer of Mosquito Joe. Brian is one of our corporate employees (pictured right, with his family) that is a veteran. Brian retired in 2012 after serving 22 years in the Navy.

“Many franchisors are recruiting veterans because they realize that military experience, in addition to fostering traits including integrity, honor, and commitment, imparts many skills that successful franchise owners have,” says Eric Stites, who is CEO of Franchise Business Review and was a First Class Petty Officer with the US Navy. “Since the number of franchise options can be overwhelming, it’s important to look closely at what veterans who are in franchising say about their experience.”

Our corporate office is located in Hampton Roads, VA and that is the home to not only the world’s largest naval base, but multiple other bases for every branch. Not only do we live among veterans in Virginia Beach, but we work among them and their family members too! A large portion of the Mosquito Joe Corporate staff is either a veteran themselves or is related/married to one. Check out our unofficial spouses’ club below!

There are times when the words “Thank you” don’t seem big enough to encompass the gratitude we hold for people and their actions. Happy Veteran’s Day to all those who have served and continue to serve. You are in our thoughts on Veteran’s Day, and every day.